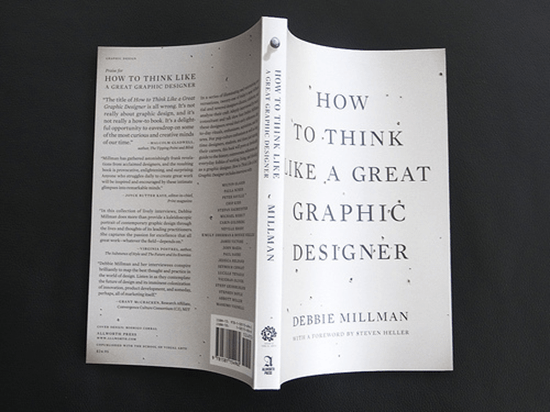 I just finished this and it was good enough that I wanted to share a couple of thoughts. So, yeah, this is a book review—my first ever (unless book reportscount, and then it’s my first since 7th grade). Bottom line: XAML guy, you should read it. If you want to poke your head into the world of serious design, this is a great place to start!

I actually purchased How to Think Like a Great Graphic Designeron a whim. I was intrigued by the audacity of the title. Well, it doesn’t work. But the book review doesn’t end here. Turns out that even though you won’t end this read with a remodeled set of neurons, it does provide some really remarkable insight into the world of graphic design, a world that is more interesting than you may have suspected. You may not know that you have graphic design heroes, but after reading HTTLGGD you won’t be able to avoid some time on wikipedia to find out more about these semi-masked avengers.

The book is made up of a series of interviews with design greats like Milton Glaser, Stefan Sagmeister and Massimo Vignelli. The interviews are short and highly readable (think “big margins”). I made it through all 228 pages in a week while traveling—you could probably do it in afternoon if you were committed. The length, I think is key. There’s a rhythm to the interviews that allows certain themes and ideas to emerge, ideas which might pass you by if you encountered them only in passing. Set in short succession like this, however, they kind of smack you in the face (in a good way). Some of the take-aways for me:

For starters, compared to the my little corner of design (let’s call it interaction design), graphic design is the Smithsonian, an institution with history, statesman and heroics. You could argue that some form of graphic design has existed for centuries. Commercial design as we know it, however, is probably better measured in decades: ancient compared to interaction design (whose lifespan is barely out of single digits), but young enough that many of its pioneering practitioners can still show up for an interview. I was struck by the nuance that four or five decades can lend to your thinking. Don’t get me wrong, there are unmistakable masters of our craft (interaction) and they often have a wealth of insight to share, but drawing on a lifetime of experience from greats like Glaser and Vignelli is priceless.

THE RELATIONSHIP BETWEEN DESIGN AND CREATIVITY

Second, I was delighted to watch as a handful of themes emerged about the nature of design. Delighted because I’ve been preparing content for my workshop at MIX, trying to find a way to deconstruct concepts like design, creativity, empathy and art and much of what I read was illuminating. I’ll save my conclusions for the workshop, but here are some favorite thoughts on the topic of design and creativity:

I have a pile of stuff in my brain, a pile of stuff from all the books I’ve read and all the movies I’ve seen. Every piece of artwork I’ve ever looked at. It’s all in there. It’s all on one side of the brain. And on the other side of the brain is a specific [job for a client]. And if you pull the handle on the slot machine, they sort of run around in a circle and what you hope is that those three cherries line up, and the cash comes out. (Paula Scher)

[Design] involves creativity in the way doing a crossword puzzle involves creativity. You need some imagination and knowledge. I think of artists as creative because they have to invent something out of nothing. I think designers design because they can’t invent something out of nothing. Or at least that’s why I design. (Michael Bierut)

For me, the best moment of the entire book, however, came in the introduction. Because of the workshop, I’ve been trying to sort out the difference between the type of design (notice the little “d”) that a developer does (classes, interfaces and eventing models) with the kind of design that gets its own department at a university. The the thing that makes them similiar, in my mind, is the ordering of things: the organization of concepts into a unified whole. The difference, however, has been harder to pinpoint. Finally, I’ve hung my hat on the word empathy. Surprised? I was too but it stuck. So, I was thrilled when Millman expressed the same thought! Sweet!

Many of the designers in this book describe design as a problem solving activity, yet it’s clear that these designers do far more than that. Despite the obvious similarities, there is one trait shared by each and every person in this group of designers: high levels of empathy.

Well, if somebody could get me to think like a great graphic designer at all I’d be interested but for now peering into the minds of the greats will have to do. Since the “Design for Devs” workshop was announced, my reading list has been filling up with design books and many are good but few give you a chance to join the club, breath the air, and feel like you belong to the world of design like this. Maybe it changed the way I think a little a after all.

New Version of Kaxaml with Support for Silverlight 2 RTW