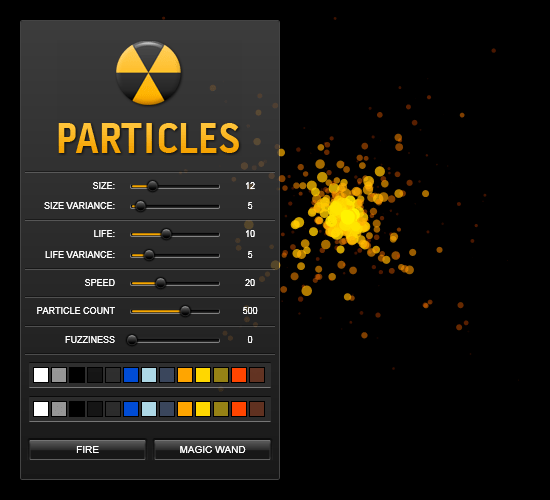 I’ve been experimenting with particle generation a little bit over the weekend.  I guess that if I were a gamer, particle effects may seem kind of ordinary.  They’re first draft fodder for game guys.  For me, though, there is still a lot of allure and new here.

The result: I’ve got myself a new effect crush. I still have a ways to go toward ideal implementation though.  The basics seem to be there, it does emit particles after all.  Most of the issues that I’ve been running into are related to performance.  There really isn’t a “lightweight” way to generate all those particles, so I end up just creating hundreds of ellipses and moving them around the screen.  Given what I’m doing, I think that Silverlight’s doing a pretty outstanding job keeping up…but I wish there were a lighter-weight way to handle these kinds of drawing operations.  In WPF, I would override OnRender for the control and then just issue drawing commands.

Well, in the meantime, you can check out a full screen version of the demo or download the source. This isn’t final, though, so stay tuned for some updates.  Planned changes may include: gravity, directional momentum, some simulated 3D, support for multiple colors and some more perf tweaking.  You can, of course, always get the most current version from the labs page.

Finally, as always, if you do end up doing something with this I would really love to know about it.  Please send email to [email protected]  Knowing that people use it is the fun part of putting stuff out there.